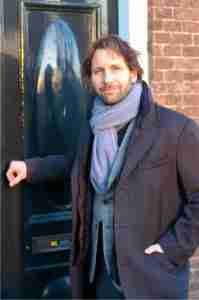 Wireless communication, while fabulous for its intended use, also has a dark side.  Increasing numbers of people complain of fatigue, insomnia, excessive perspiration, headache and more, especially when they use a mobile phone or computer frequently and for long periods.  This raises the question of whether these complaints are caused by the electromagnetic radiation emitted by these devices and whether these complaints could be a prelude to more serious disorders in the longer term.
Marc Schechtl experienced the negative effects of electromagnetic radiation first hand to such an extent that he gave up a promising career as a tax consultant at a prestigious office in Holland to fully concentrate on recovering from his physical complaints.  Only when he finally moved away from the world of offices, dominated by wireless communication, to the dunes near The Hague where he and his wife lived in a tent did his quality of life began to improve noticeably.
High Sensitivity
“There are people who are highly sensitive to electromagnetic radiation and have what is perhaps best described as an allergy to this type of radiation – just as people who strongly react to a bee or a wasp sting.  I am a good example of this type of hypersensitivity, called Electrical Hypersensitivity Syndrome (EHS), but EHS affects a relatively small group of people.  When we ask ‘is electromagnetic radiation harmful’, we really mean the effect it has on large groups of people, and especially the effects you could consider a threat to public health.   Much research so far has been inconclusive, although evidence is building, but what the effects may be in the longer term is still unknown.”
Marc is a great proponent of modern technology.  “Of course,” he says “we do not want to give up the advantages of this technological revolution and fortunately this is not necessary because now a technology has been developed which transforms electromagnetic radiation associated with wireless communication into biological frequencies.  That is: into frequencies which are naturally present in humans, animals and nature.  The starting point is that we do not fight the radiation, but use it, thus generating a positive energy that makes you feel better in a wireless environment.   This is the core of Floww Health Technology, a series of products for your cell phone, your PC or laptop and for the home and office.”
personalFloww®
When Marc and his wife took up residence in their tent they were introduced to ‘radiation biologist’ Jim Wagenaar.  From Marc’s old point of view he was more like  apparition from another planet than a brother in arms.  “Indeed,” he says now, “the world of radiation and alternative solutions was a far cry for me back then, however, if you’re desperate you will try anything and on my quest for a cure I tried several alternative therapies, all without lasting results. So when Jim knocked on my ‘door’, I secretly thought: well, here comes another one…”
What Jim gave Marc was the prototype of a product which is now called personalFloww®.  “Jim had been studying the effects of electromagnetic radiation for many years and the device he gave me was the result of his work: a kind of transformer to carry with me all day.  Almost immediately, it had a noticeable positive effect on me.  Ten years have passed since that first meeting and in the meantime we have become an internationally operating company!  And me? Well…(big smile) I haven’t slowed down ever since.”